You have two basic choices for how to connect to a remote server such as KLC.

One option is to use a secure shell (ssh) client. An ssh client will usually give you the option of working either with a point-and-click graphical interface or through a plain-text command line interface. Which ssh client you use depends on whether you are connecting from a Windows or a Mac computer.

Alternatively, you can use FastX as a simple way to get a graphical interface. With FastX, you could open Stata on KLC directly through your web browser, for example, and the experience would be much like running Stata on your personal computer.

Kellogg Windows computers do not come with a pre-installed ssh client. So you will need to choose one and install it yourself. Research Support staff like to use MobaXterm, which has a very good free version. Because neither Research Support nor KIS can support the MobaXterm application, you should consider purchasing their pro version in order to access technical support. Other popular ssh clients include SecureCRT, PuTTY, and Cygwin.
The image below shows how you can set up a connection to KLC using MobaXterm. 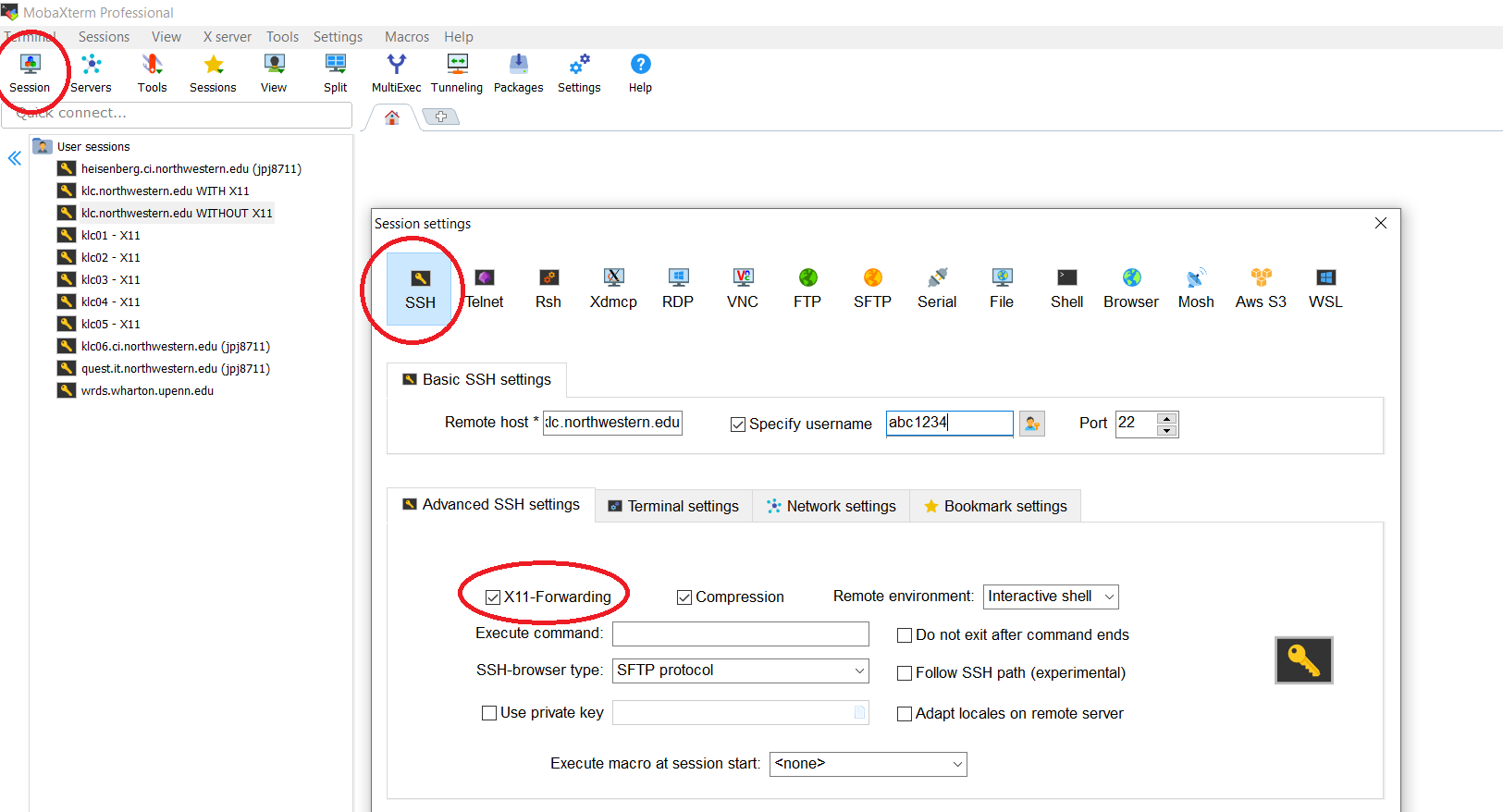 Notice in the example above, we have previously defined several user sessions. Some use X11 forwarding while others do not. Some connect to the KLC load balancer while others connect to specific nodes. Still others connect to different sessions, such as WRDS. If you work on remote servers regularly, you will find it convenient to save and label a set of commonly used sessions.

Mac computers come with a the Terminal program already installed as a standard program. To create a "plain" (not graphical) connection to the least busy KLC node, you would simply open Terminal and type:

If you prefer a graphical (X11) interface, just add the -Y option:

Occasionally you might receive an error that says something like "host key verification failed." Most of the time, you can fix these problems by deleting your host key file and trying again:

Note: Depending on the vintage of your Mac, you might need to install the free XQuartz application before X11 forwarding will work.

Getting a FastX graphical interface to a KLC server is as simple as putting your web browser to one of these server addresses.

Which One Should You Use?

Here are a few considerations to keep in mind when choosing whether to use ssh or FastX.

Graphical interfaces are slower than plain text interfaces are. If you open a program with X11, it might take a few seconds to load when the non-X11 version would load almost instantly. Like the name implies, FastX is relatively fast compared to other X11 tools. So FastX is a wise choice if you want a graphical interface.

Most ssh clients come with file transfer (sftp) capability built into them. With FastX, however, you will need to install and use a separate program (like Cyberduck) in order to move files to and from the KLC servers.

In general, we suggest becoming comfortable making ssh connections and using the command line, at least occasionally. Although point-and-click interfaces are convenient and intuitive, relying on graphical interfaces will present challenges to the future reproducibility of your work.

Other pages in Kellogg Linux Cluster: