The safety of our community and guests is our first priority.

At Kellogg, we develop leaders that inspire growth in people, organizations and markets.

What's it like being in a Kellogg MBA program? Find out through this special collection of events, articles, videos and podcasts.

Get to know more about the Kellogg experience
Executive Education

Learn from our esteemed faculty in a rich, interactive digital environment, and equip yourself for a new, dynamic business landscape.

What science can tell us about Building Great Teams

How well do you understand what makes a great team?

Create a new profile or update your information in the Northwestern Directory to receive the latest Kellogg news, publications, event invitations and alumni benefit updates.

Smith is remembered as a “rare multitalented academic” and devoted husband and father who inspired countless friends, students and fellow researchers.

The Kellogg community mourns together upon learning of the death of Ned Smith, associate professor of management and organizations. Smith passed away on Saturday, September 25, after a long battle with brain cancer.

He is survived by his wife, Erin, and their four children, Finn, Beckett, Eliza and Cecily.

“Ned was a brilliant academic, a gifted educator, and a force of nature who made such an impression on everyone he worked with, taught and mentored. His warm smile and infectious laugh will stay with all of us,” said Dean Francesca Cornelli. “Our Kellogg community is heartbroken, and we extend our thoughts to his family and friends during this difficult time.”

“Ned was a truly wonderful colleague,” said Provost and First Chicago Professor of Finance Kathleen Hagerty, who previously served as Kellogg’s interim dean. “We mourn the loss of an inspirational man whose lively contributions energized Kellogg and were felt throughout the entire Northwestern community.”

As a researcher, Smith deeply cared about how social networks form and the impact that biases have on individuals and society. His pioneering work showed that social networks, once thought to be based solely in social interactions, can have influential cognitive and psychological determinants. His insights inspired new research in a growing, cross-disciplinary area.

“He was a truth teller. Somebody who would look you in the eye and tell you when you were wrong — but you never felt bad because it came from a good place,” recalled his friend and colleague Brayden King, professor of management and organizations and Max McGraw Chair in Management and the Environment. “His colleagues appreciated that clear-eyed search for truth, and that was apparent in every meeting, every interaction he had with them.”

Smith was seen as a rising star from the very beginning of his academic career, King said. He earned his PhD in economic sociology and organizational behavior from the University of Chicago in 2010, and he developed his dissertation into an article that was published the next year in Administrative Science Quarterly, the most prestigious journal in his field. That article, “Identities as Lenses: How Organizational Identity Affects Audiences’ Evaluation of Organizational Performance” won the 2012 Best Published Paper Award from the Academy of Management (OMT Division), a highly esteemed recognition in his area.

Damon Phillips, Smith’s dissertation adviser, recalled how his dissertation advanced the understanding of why being unique can be advantageous for a company, a contrarian position at the time. It pushed against the established ideas “and it was just a taste of what was to come.”

“Ned made an enormous splash as a young scholar because he is a rare multitalented academic who broke the rule that one had to choose between doing high-quality work and being very productive. He was both, and I hadn’t seen anything like it,” said Phillips, a professor of management at the University of Pennsylvania’s Wharton School.

Smith later went on to win the 2016 Best Paper Award from the Academy of Management. He also served as senior editor of Organization Science, another top journal in the field, affirming his reputation among peers as a respected tastemaker and rigorous assessor of good research.

In his work, Smith urged his colleagues to come up with the best possible answers to the questions they asked, said his colleague Jillian Chown, associate professor of management and organizations at Kellogg. “This clearly made Ned’s research better,” she said. “But perhaps more importantly, it elevated the research of everyone around him.”

As a teacher, he brought a spirit of innovation to the classroom. Even after his 2018 diagnosis with glioblastoma, an extremely aggressive form of brain cancer, he crafted an interactive online program, Strategic Change Management, that became one of the most popular online course offerings in Kellogg’s Executive Education program. 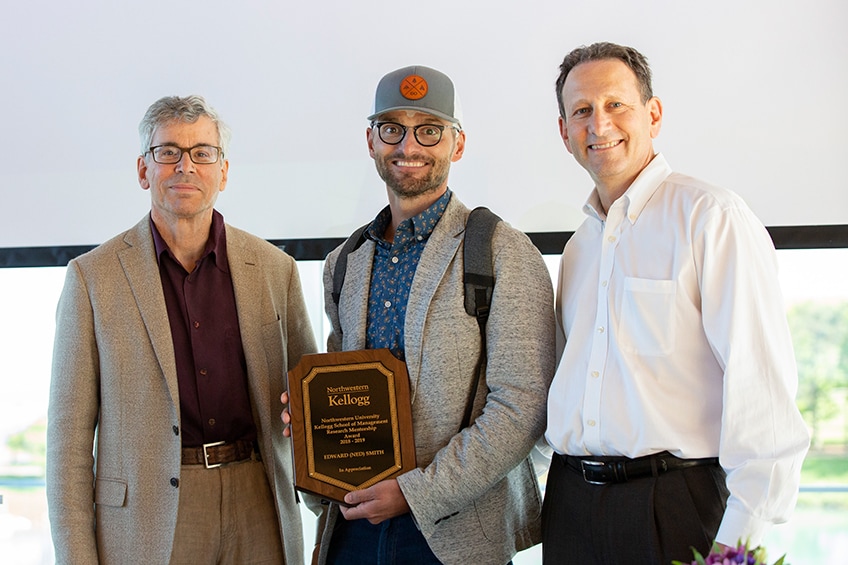 In 2019, he received Kellogg’s Research Mentorship Award, a recognition created and awarded by doctoral students. The award, which will now be renamed in Smith’s honor, celebrates faculty who demonstrate excellence in advising and mentoring PhD students and preparing them for productive research careers.

His passion for PhD training shone through in how frequently he published with students, and in students’ excitement in working with him, King said. “Any student whose life he touched looks back with great enthusiasm for the mentorship he gave them.”

Smith emphasized the importance of empathy both inside and outside the classroom, saying in a post on his LinkedIn profile that “I do believe that our greatest gift is our ability to derive reason and make meaning from our experiences. I believe that empathic human interaction is the basis of most things that are good and sustainable.”

“As often as I can,” he wrote, “I remind my children to look for people to thank when things go well for them, and to think about how they could have helped when things go poorly for others.”

In an online journal, Smith chronicled his cancer journey in the hopes that sharing his experiences could help others also dealing with cancer. Following his death, hundreds of friends, colleagues and students have posted remembrances to the website recalling Smith’s generosity and strength, describing how he inspired those around him as a researcher, friend and father.

His motivation to help others will live on through Pickles Group, a nonprofit that the Smiths focused on in the last years of his life. The nonprofit officially launched a week before his death, co-created with two other Chicago-area families that have each navigated their own cancer diagnoses. The group provides free peer-to-peer support and resources to children affected by a parent’s cancer.

“A lot of people, when they got a diagnosis like this, they would have shrunk in, and he did the opposite — he bloomed,” said King. “Just the time, the energy, the focus that requires is, to me, amazing and a testament to who he was as a person.”