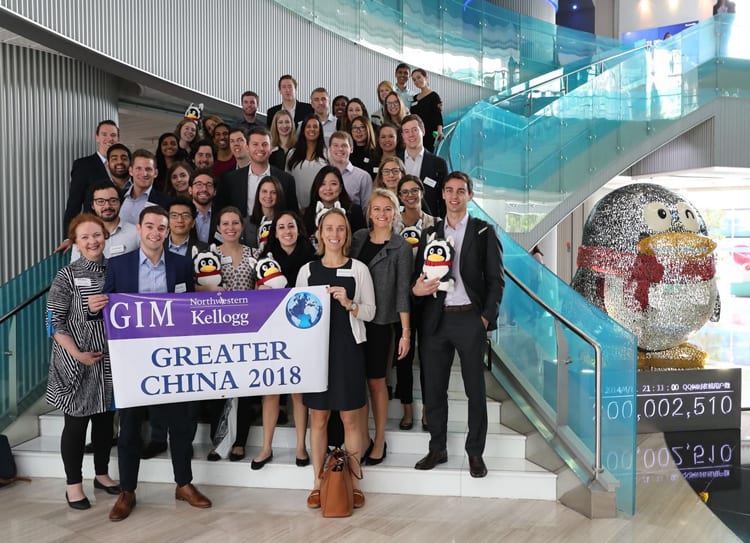 How many times have you heard the phrase, “China’s taking over the world”? I would guess at least once, if not many times.

China’s rise on the global stage in the last two decades has been impossible to ignore, but I recognized that I was ignorant to much of the country’s history and the factors that led to its ascension. Before starting my first year at Kellogg, I already knew that I wanted to participate in the Global Initiatives in Management (GIM) course on China to bolster my understanding of the business, political and cultural landscape in the world’s second largest economy. What better way to do that than to travel with 37 of my Kellogg peers over spring break?

Looking back on the 2018 Kellogg GIM China course

Our journey started in the classroom, where Professor Ma led us through an in-depth review of China since the late 1800s. I was immersed in readings of almost novel-like historical critiques covering painful and fruitful periods such as China’s Century of Humiliation and later the Cultural Revolution. I devoured presentations from global Fortune 100 leaders and international journalists who lived and worked in the country and provided us their up-to-the-day analysis. Being a political junkie, this was a welcome balance to finance and operations lectures. In small groups, we began exploring topics of interest and reaching out to experts in our fields of study.

The highlight of course was our time in country. We saw perfectly coordinated soldiers marching through the grounds of Tiananmen Square in Beijing on our first day, a moving metaphor for the power of centralized government to propel China’s economic initiatives. In Shanghai, I marveled at the romantic mix of architecture inspired by British colonialism and futuristic design. Hong Kong showcased a fascinating blend of eastern and western youth culture that kept my sense of place off balance and drawn in at the same time. Everywhere we went, we saw masses of people, all connected on mobile phones using social network technology that dwarfs our most prevalent options in the US.

We spent much of our time meeting with business leaders, who explained many of the complexities of the economic environment in China. One of the leaders my group interviewed said there was “no such thing as work-life balance in China”, and this was echoed by others we heard from. This insight helped me connect the dots between our lectures and what I saw on the ground: much of the historical struggle engrained in the Chinese people over centuries has instilled an intrinsic desire to create great and impactful institutions and make their mark on the global stage.

GIM was so much more than a class or a spring break trip. The experience allowed me to immerse myself in a culture and see an incredible amount of an influential country. It was an opportunity to build new relationships with my classmates. Most importantly, it was an experience that helped me more deeply understand the globalized world we work and live in and gain greater respect for China.