For much of my career, I understood the value of a strong network in military terms as I faced challenges as an officer in the Israel Defense Forces. As I celebrated the 20th anniversary of the Kellogg Global Network in Tel Aviv on November 1, 2017 with hundreds of Kellogg alumni and faculty, including Dean Sally Blount, it became clear to me that a network could be defined in numerous ways, and that I was lucky to be part of one as vibrant and strong as Kellogg’s.

Celebrating a 20th anniversary is a significant event, and the excitement was palpable that evening. It was a particularly exciting for me and my classmates, because on the following evening we would be concluding two significant years and graduating from the Kellogg-Recanati Executive MBA program as members of its 20th class, joining the ranks of the Kellogg Global Network. 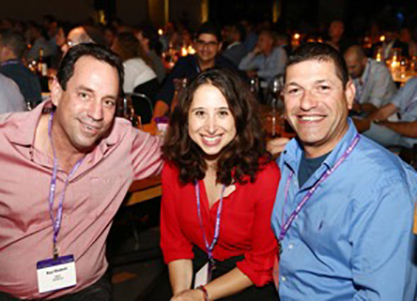 When Kellogg decided to expand its executive education beyond the United States, Tel Aviv was a clear choice. Nestled on the Mediterranean, Tel Aviv is a city that is constantly looking to innovate, pioneer and break boundaries, the perfect location for Kellogg’s first international campus. This energy was felt by everyone, as alumni and faculty from all of Kellogg’s campuses in Israel, the U.S., Germany, Canada, Hong Kong and China, along with guests from dozens of other countries, gathered to celebrate.

Much has changed in the last 20 years, but Kellogg’s commitment to providing its students with the tools to become stronger and better leaders hasn’t. As I looked around the crowded room and heard greetings between old friends in various languages, it was clear why this global network was worth celebrating. We listened to riveting messages from faculty and alumni in the fields of tech, media, venture capital and others.​ We heard about the importance of equipping students with the 21st-century business savvy from the academic director of the Kellogg Recanati program, Professor Yuval Kalish. We heard how the value of the network far exceeds one sentence in our CVs from Lior Freedman, and how much easier it is to do business with the strength of the network from Fiona Darmon and Amany Dahir. Tzahi Weisfeld told us –simply put – to go, do it and accelerate.

These messages, and others we heard from alumni and guests, all focused on working smarter, better and stronger together to face today’s challenges. As I looked at my classmates, who have become family over the last two years, and over the crowd, I realized what a inspiring example this network is of the diversity celebrated at Kellogg: empowered women and men, of different ages, races, religions, experiences and professional disciplines, all Kellogg.

My two years in the Kellogg-Recanati program were filled with exactly the same energy and excitement felt by all of us that evening. It was a true honor marking such a significant anniversary with friends from all over the world, and a true example of the power of our network.