Second-year student Rohan Rajiv is blogging about important lessons he is learning at Kellogg. Read more of his posts here.

I had been looking forward to a Skype interview with Seth Godin at school for many months. It took me a few months before I was sure the technology would work. I promised him a good experience and I definitely felt a bit of the pressure of the promise in the days leading up to it. It all worked well (thank you to KIS – our tech team!) and the interview was a real treat.

Unfortunately, though, the video recording was not the best. So I’m afraid I’m unable to share that with you. Seth has very kindly offered an audio interview in the future. I won’t be taking him up on it anytime soon as he was so generous with his time and perspective. But I look forward to doing so in a year or two.

Until then, I am pleased to share my notes. These are paraphrased, and “I” refers to Seth.

Thank you so much, Seth. I intended to have a CliffNotes version of the talk, but there were SO many pieces that resonated. 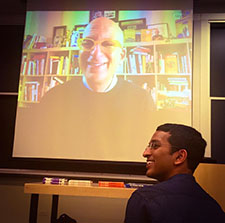 On general and specific. There’s a difference between a wandering generality and a meaningful specific.

On how we’re measured. Today, we are measured on the change we make on other people.

On daily blogging. It is malpractice to not have a daily blog, because if you write something in public every single day for 50 years, you will be better. You will be happier, you will be smarter and more connected. When you look back on your posts, what you are going to see is your intellectual development. Doing it in public is much better because you can’t lie to yourself and you can’t skip a day.

On productivity and the MBA. (I asked Seth a question about productivity, but he decided to talk about what he thought was more important. I am glad he did.) In some ways, it is the best time in history to get an MBA. In some ways, it is the worst. It is the worst because there is more supply of people who did what MBAs did than ever before. There are also less organizations who demand the blue chip stamp. And then there are other organizations who are asking you to do things that aren’t necessarily things you want to do – they’re just paying more.

The reason this is the best moment is – if you choose to, you can see. You can see how the world works, you can see through the lens of behavioral economics, industrial history, social movements. You can see all of these pieces fit together – not from a technical point of how do I do this or that. None of the technical stuff is going to matter four years from now. What’s going to matter four years from now or 20 years from now is – are you the person in the room who sees the world as it is and cares enough to change it? There are very few people who are privileged who can do both of those things. I think that is 10,000 times more important than your productivity. What we know is that it doesn’t take an enormous amount of sleepless nights to do those 2 things. What it takes is the bravery to do something that might not work.

On mentors and heroes. There aren’t enough mentors for every mentee. Heroism scales. If you decide to be a long term investor, you can ask – what does Warren do? And, you can read his book or the Berkshire Hathaway annual report. Heroes don’t have to be rich or famous. They just have to be on a path that you hope to go on one day. The magic of that is that you can inculcate their beliefs and act as if. And, sometimes, you can get really good at it and do it better than they did because you are starting with a bigger head start. (So, you can read my 7,000 posts and go farther than I ever did. I’m just trying to be a compass.)

On being right. Being right about the strategy is irrelevant if your audience isn’t enrolled. You’ve been trained to be right. It has taken me a long time to train myself that being right isn’t all that important. The people who are daring and are doing it out of generosity make WAY more impact. If you look at the list of products that Apple and Microsoft have made over the last 25 years, it will stun you. It just goes on and on with one wrong product after another. You can be wrong a lot of times and make the iPhone and you will be fine.

On Trust. Trust comes from making promises and then keeping them. The goal is to not just be consistent, but to make bigger and more generous promises.

On career choices. Acceleration is a change in velocity. I picked a job after school based on two things – was it in an industry that was growing fast, and who was going to be my boss?

I’ve done projects all my life. With projects. you realize that you don’t have to hit home runs ever. Singles are better than a home run. People who talk to me about regrets after business school bought safety when they left. They started wanting to do that for four years. But what they don’t do when they get there is share an apartment and eat brown rice and white beans everyday. Instead, they buy a BMW (since they have a miserable job) and the next thing you know, they get a promotion and stock options. Then, they worry about losing the stock options – haven’t you guys gone to your sunk cost class?

Trade safety for acceleration and freedom.

On the AltMBA. The goal is to transform into people who see the world as it is, to understand how to use words and images to cause other people to change their mind, and how to make better decisions. If we can help people do those three things, the sky is the limit.

Everyone of you, even those with appropriately sized egos, is more powerful than you imagine. The challenge we face is – given that power, what are you going to do with it?

On creative process. As I get older, I get better at my creative process and get less creative. Because I don’t think those two things go together. There is no such thing as a creative process. Creativity is the work you do when you are not afraid. And whatever method you can find to stop being paralyzed by your fear – because you can’t make it go away – but so that you can dance with it is good. People who have something to show for their creativity have it because they decided it was important and cared enough to live with the fear.

Every one of you is an artist who has been pushed to fit in. The hard part now is to care enough to fail, to care enough to say – “Here, I made this.” And, when the person says – “I don’t like this, I don’t like you, you are a fraud”, you can say – “Oh, it must not be for you.” Then, offer it to somebody else.

On quitting. Quit before you start if you are not prepared to stick it out to the end.

On parenting. Every kid is home-schooled between 3-11 o’clock at night. Even if you are not at home, they are home-schooled. You’re going be asked to trade-off time with your family for metrics of money or notoriety. I hope you’ll choose to trade some of it, maybe even a lot of it … because they are counting on you.

On difficulty. I’ve been bounding out of bed every morning for 38 years. It is a choice. I’ve been to places where any of us would do almost anything to not have to live in that village with no electricity. And I remind myself on a regular basis – this is not hard work. This might be difficult, but it is not hard work. Hard work involves helping someone with leprosy, burying someone you grew up with. This is the safest human beings have been in our history, more powerful. What a privilege.

Rohan Rajiv is a second-year student in Kellogg’s Full-Time Two-Year Program and a Siebel Scholar.Prior to Kellogg he worked as a consultant serving clients across 14 countries in Europe, Asia, Australia and South America. He interned at LinkedIn in Business Operations and will be heading back to LinkedIn full-time after he graduates in June 2016. He blogs a learning every day, including his MBA Learnings series, on www.ALearningaDay.com.