Why I got married at Kellogg 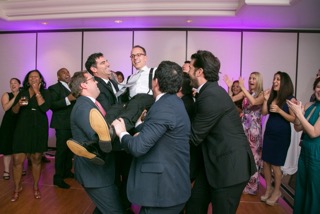 On October 24, 2015, Miami student Mark Dumais ’16 married his longtime partner on the Miami campus. He reflected upon his wedding and Kellogg experience.

When the Supreme Court ruled on Obergefell v. Hodges this past June, the ambiguity regarding the status of same-sex marriage in the United States was definitively resolved. Having shared a home and just about everything else with my partner for the prior 13 years, overnight it became virtually inexplicable why we were not married.

So how does a busy professional halfway through the Kellogg Executive MBA Program find the time to plan and enjoy a wedding? Get married during an EMBA class weekend in Miami!

The Miami campus is a great venue, and my classmates certainly know how to have a fun time. And the business-minded, tactical efficiency of getting married literally between class sessions is befitting a student presently taking Strategic Decisions in Operations.

Obergefell was a 5-4 decision, and as recently as 2014 Florida had had a same-sex marriage ban. Obtaining majority support is a profound tipping point, but it does not eliminate all challenges or silence detractors. Thus, the fundamental requirement for a successful gay wedding is an inclusive environment.

Northwestern University president Morton Schapiro’s words on the matter have taught me to draw a clear distinction between mere diversity and true inclusiveness. The day after the Obergefell decision was announced, my Kellogg friends from Canada, Brazil and Argentina were quick to point out their countries were ahead of the U.S. on marriage equality. But regardless of country of origin, my Kellogg classmates understand that people have more similarities than differences.

Kellogg teaches us to pull diverse people together into effective teams that are more powerful than any of their individual members. To do this we must recognize and appreciate the value of each person and understand that diversity makes groups stronger. By embracing our differences we achieve inclusiveness and optimize our community for productivity and learning by all members.

Truth be told, it was my partner Jim who first recognized that Kellogg was where we should be married. But the wisdom of that decision became obvious almost immediately. We could not have asked for a more positive, supportive, inclusive setting. Clearly, my husband also makes me better than I am as an individual.

Before Kellogg, Mark Dumais graduated University of Virginia and Harvard Medical School. His work in Hospital Medicine led to progressive responsibilities in practice management and hospital leadership. Following Kellogg, Mark looks forward to applying his business education to a number of new challenges.  Mark and Jim have both lived most of their lives in the Washington D.C. metropolitan area, where they met.