Biopharmaceutical Innovation After the Pandemic

Biopharmaceutical Innovation After the Pandemic

Each year, the Healthcare program at Kellogg convenes a group of healthcare experts for the MacEachern Symposium. This program includes two keynote lectures, one by a leading academic and a second by a leading industry practitioner. The symposium features distinguished speakers and business leaders from around the nation to discuss the most pressing issues in the healthcare industry.


Join students, faculty, and industry peers in discussion about Biopharmaceutical Innovation After the Pandemic.

Pierre Azoulay is the International Programs Professor of Management at the MIT Sloan School of Management, and a Research Associate at the National Bureau of Economic Research.
His current research focuses on empirical studies of the supply of biomedical innovators, particularly at the interface of academia and the biopharmaceutical industry. He also is interested in the topic of academic entrepreneurship, having recently concluded a major study of the antecedents and consequences of academic patenting. In the past, he has investigated the impact of superstar researchers on the research productivity of their colleagues, and the outsourcing strategies of pharmaceutical firms, in particular the role played by contract research organizations in the clinical trials process.
At MIT Sloan, he teaches courses on competitive strategy and innovation strategy to the EMBA students and Sloan Fellows, as well as a PhD class on the economics of ideas, innovation, and entrepreneurship.
He holds a Diplôme d’Études Supérieures de Gestion from the Institut National des Télécommunications, an MA from Michigan State University, and a PhD in management from MIT.


Scott Gottlieb, MD is a physician and served as the 23rd Commissioner of the U.S. Food and Drug Administration from 2017 to 2019. Dr. Gottlieb’s work focuses on advancing public health through developing and implementing innovative approaches to improving medical outcomes, reshaping healthcare delivery, and expanding consumer choice and safety. He is currently a senior fellow at the American Enterprise Institute and a member of the board of directors of Pfizer, Inc, Illumina Inc, and Tempus Labs. Dr. Gottlieb is a partner at the venture capital firm New Enterprise Associates where he is a member of the firm’s healthcare services and biopharma investment teams. For NEA, he serves on the boards of National Resilience and Aetion.

Under his leadership, the FDA advanced new frameworks for the modern and safe and effective oversight of gene therapies, cell based regenerative medicines, targeted drugs, and digital health devices. The agency advanced new models for the regulation of artificial intelligence devices, veterinary medicines, and orphan drugs; and implemented new reforms to standardize drug reviews and make important improvements in post market data collection and the use of realworld evidence. The agency’s historic and prolific advances in new policy distinguished his tenure as the FDA’s commissioner, in addition to a record-setting number of approvals of novel drugs, medical devices, and generic medicines in 2018 and again in 2019.

Dr. Gottlieb promoted policies to reduce death and disease from tobacco, improve food innovation and safety, expand the agency’s oversight of areas of emerging risk such as dietary supplements and cell-based medicine, and aggressively confront addiction crises. The FDA advanced new legislative frameworks to address the opioid crisis, grow its field operations, and modernize the regulation of diagnostic tests and over-the-counter drugs, among other initiatives. Dr. Gottlieb forged collaborative relations with Congress that saw FDA increase its total budget by about $1 billion over two years. During his tenure, he testified before Congress 20 times.

Previously, Dr. Gottlieb served as the FDA’s Deputy Commissioner for Medical and Scientific Affairs and before that, as a Senior Adviser to the Administrator of the Centers for Medicare and Medicaid Services, where he helped implement the Medicare drug benefit, and advance policies to improve healthcare quality and promote the effective use of new medical technologies.

Dr. Gottlieb is author of the New York Times bestselling book “Uncontrolled Spread” and is widely published in leading medical journals and periodicals, including The Wall Street Journal, The New York Times, and The Washington Post. He holds an editorial position on the Journal of the American Medical Association. Fortune Magazine recognized him as one of the “World’s 50 Greatest Leaders” in 2018 and again in 2019. Modern Healthcare has named Dr. Gottlieb as one of the “Most Influential Physician Executive and Leaders” in its annual survey of 50 physician executives, and Time magazine named Dr. Gottlieb as one of its “50 People Transforming Healthcare in 2018.” He is a contributor to CNBC and CBS News Face the Nation.

Dr. Gottlieb was a practicing hospitalist and a Clinical Assistant Professor at the New York University School of Medicine. He is an elected member of the National Academy of Medicine.


Dr. Steve Miller, is a nationally recognized advocate for greater access, affordability and excellence in healthcare. He is a trusted expert and advisor for Cigna’s efforts across clinical policy, quality and performance programs. He stepped into this role in 2022 after serving as the company’s Chief Clinical Officer for nearly five years.

Dr. Sun joined Bain Capital Life Sciences in 2016. He is a Managing Director. Prior to joining Bain Capital, from 2013 to 2016, he was a Director of Corporate Development and Strategy at Biogen. Prior to Biogen, Dr. Sun served as a Vice President at BlackRock, as a member of the Fundamental Equity division of BlackRock's Alpha Strategies Group and senior analyst for BlackRock's Fundamental Large Cap Growth equity team, covering the health care sector. Prior to that, he was a senior healthcare analyst at Citadel and Alyeska Investment Group in Chicago and worked as a pharmaceuticals equity research analyst on Wall Street, spending time at Lehman Brothers and Morgan Stanley. Dr. Sun began his career as a senior scientist at Ironwood Pharmaceutical where he was involved in the discovery and development of the drug Linzess for irritable bowel syndrome.

Airbnb
Airbnb has listings for rent throughout Evanston and Chicago

The Chicago Transit Authority (CTA) maintains an extensive system of elevated trains (also known as “the L”) and buses throughout Chicago and Evanston. The train stop closest to Kellogg is the Purple Line Foster stop on Church and Davis Streets. The 201 bus departs from the Howard St. terminal and stops on the corner of Foster and Sheridan.

Be advised, while inexpensive, taking the CTA from the airport can take up to 90 minutes and requires transferring trains.

The Challenges of Paying for Valuable Pharmaceuticals 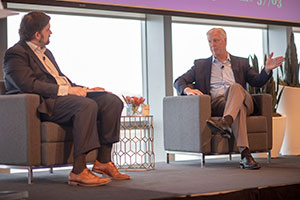 The Public-Private Partnership of U.S. Healthcare 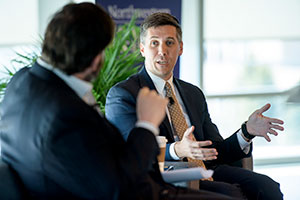 Can Markets Be Used to Control Healthcare Costs 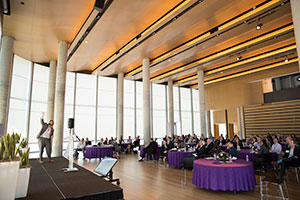 A Conversation on the Future of Anti-Trust in Healthcare Markets
Amanda Starc, PhD
Associate Professor of Strategy
Northwestern University, Kellogg School of Management

Public and Private Exchanges: What Does the Future Hold? 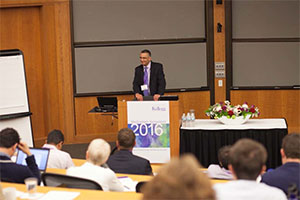 Malcolm MacEachern Memorial Lecturer: Public Health Insurance Exchanges: Where they came from and where are they going?
Jonathan Gruber, PhD
Ford Professor of Economics
Massachusetts Institute of Technology 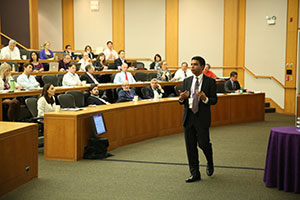 Luncheon and the Year Ahead in Healthcare: A Forecasting Panel
Moderator: Craig Garthwaite, PhD
Assistant Professor of Strategy, Kellogg School of Management